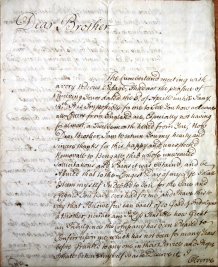 Younger sons of the gentry faced so much emotional turmoil from having to make their own way in the world they suffered from anxiety, research shows.

New analysis of hundreds of letters written between the late seventeenth and the late nineteenth centuries shows the men poured their heart out to their families in emotive notes in order to find more support.

During this period younger sons in wealthier families occupied a more precarious and unstable position in society because they didn’t have the same income or role as their elder brothers, and were expected to enter into a profession. The 734 letters from 11 families show the sons and their parents and guardians both worried about this. Children because they felt they didn’t have enough income or status, and their families because their son’s success was vital to uphold their reputation.

The analysis shows younger sons expressed themselves with more ‘feeling’ than their elder brothers. This process of writing the letters in itself disrupted their own emotional equilibrium and mental well-being. But the men knew that expressing their emotions would arouse anxiety in their parents and guardians about their struggles to be masculine and contribute to the honour, survival, and flourishing of the family and their estates.

The sons used words such as unhappy’, ‘unease’, ‘dismay’, ‘destitution’, ‘suffering’, ‘dejected’, ‘indebted’, ‘wretched’, and ‘disgraced’. They could be quick to remind senior members of their family of their duty to find them a livelihood, if they felt that it was being ignored and this could produce tensions between siblings. The letters worked - the men usually gained some kind of settlement from their family.

Professor Henry French, from the University of Exeter, who co-authored the study with Dr Mark Rothery from the University of Northampton, said: “Younger sons during this period were open about their feelings in order to deal with these emotions and establish themselves as men in the world. They felt as if they didn’t have emotional autonomy, and wanted to be more in control of their feelings.

“But expressions of anxiety and distress were intended to elicit emotional responses in their parents, to urge them to do more to care and nurture. Parents and guardians used correspondence to try to control the emotions of younger sons, sometimes using anxiety as a means of shaping behaviour, always sublimating them to the honour and wealth of the family.

“We found the flow of correspondence lessens as the men had to deal with their own concerns when they started their own families, which shows they did often achieve the very masculine accomplishments that had caused them such anxieties as young men.”

Some of these anxieties had been caused by parents. From an early age, younger sons were told repeatedly they needed to become financially self-sustaining. The letters show parents and elders felt the ‘duty’ of a younger son was to minimize his cost to the core family, particularly in adulthood.

Robert Parker, younger brother of Thomas Parker, was so keen to minimize his dependence on his eldest brother that he refused medical treatment on his gouty, gangrenous foot, which led to his death in 1805. Thirty years later, second-son John Parker was in such financial straits that he wrote: “I am perfectly wretched about it, and it is not owing to my own recklessness that I am short of money as I have been most economical…I lie awake at night thinking & scheming how to mend my affairs, but I see nothing before me but a hopeless blank. The little ambition I once had has almost disappeared, and my life is all a dream from which I strive hard to awake but cannot.”

During this period most older sons were given land or an estate, either or life or as a lease. By the 18th century they were more likely to get a cash settlement. The agricultural depression, legislation to break property entails, and increases in inheritance tax destabilized the estates system and caused eldest sons more frequently to regard their inheritance as a burden.