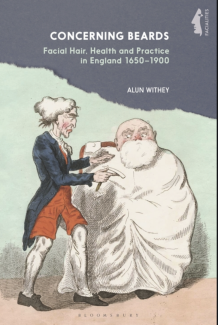 Concerning Beards: Facial Hair, Health and Practice in England 1650-1900 is published by Bloomsbury

The 18th century gentlemen may often be viewed as perfectly groomed and bewigged, but in reality he only shaved once or twice a week, and probably often had heavy stubble, new research shows.

The period has been described as the first beardless age, as views about the link between facial hair and masculinity changed – but it is likely few men always looked clean shaven.

Evidence from diaries and household records suggest that for many men shaving took place only once, twice or thrice weekly, very often on a Saturday in preparation for church.

These fascinating details about male grooming are found in a major new book about the history of facial hair from 1650-1900 by beard and medical historian Dr Alun Withey, from the University of Exeter.

In the book Dr Withey shows how barbers were important figures in men’s lives. Between the mid-seventeenth and mid-eighteenth centuries most men went to barbers rather than shave themselves at home. Barbers were seen as medical practitioners, and became part of the civic fabric of early modern towns, and their guilds and companies were important institutions. Barbershops were common in towns and villages across the country, varying in size and status. Prices were tailored to suit the pockets of customers, with some barbers offering swift and cheap penny shaves, while others looked to create something more of an experience.

Middle and upper class men paid barbers to visit their homes, paying them on account monthly, quarterly and sometimes annually, suggesting they had long-term relationships with their favourite groomer. For poorer men, cheap and cheerful ‘penny shaves’ were widely available in barber shops.

As the book also reveals, even the huge fashion for beards from the 1850s didn’t stop the barber, and at times they were even experiencing almost overwhelming demand from working-class men. Some barbers were forced to work all night on Saturdays to cope with the constant queues of labourers for their weekly shave.

But despite the ongoing importance of the barber, the 18th century also saw men increasingly begin to shave themselves. Rather than risk a painful shaving rash and the stereotypical incessant chatter of the barber, adverts for razors, and a whole range of shaving pastes, powders and lotions, encouraged ‘gentlemen who shave themselves’. Advice was available in etiquette manuals and articles in newspapers and books. Razor makers also made manuals for both men and servants.

The book addresses a wide range of questions, from who taught men to shave, to how removing beards and stubble could be physically enforced in prisons and other institutions.

Dr Withey said: “It has been fascinating to see the links between men and their barbers over the years, and the changing way in which they were viewed by society.

“Barber shops were important social spaces for men. Paying for a barber to visit your home was a mark of status. Although self-shaving was initially limited to wealthy elite and middling gentlemen, who could afford the often-costly equipment, over time it became part of the essential grooming tasks expected of a man.”

The book also explores the medical history of facial hair and shows how people in early modern England thought facial hair was one of the body’s excrements – effectively an exhaust gas left over from the production of sperm deep within the body, which gradually made its way upwards and outwards, solidifying on the surface of the face. It was even regarded by some physicians as the male equivalent of female menstruation. This meant many saw the beard as a symbol of male strength and virility. The thickness, quality and colour of facial hair were therefore seen as important markers of inner heat…and virility.

The face of an Englishman before 1650 was likely to be hairy, but beards and moustaches disappeared from male faces across Europe from the last decades of the seventeenth century because of the trend to look more youthful, smooth, polite and refined, as well as the rise of wig-wearing.

The fashion for a shaved face lasted virtually 150 years, until the Victorian beard movement saw the widespread fashion for large bushy beards that has become virtually synonymous with the age. The beard was then seen as an outward symbol of inner strength as well as a natural protector against the harsh, outdoor life for which men were supposedly fitted.

But, as a study of the faces of runaways, criminals and prisoners in the book shows, beard fashions could vary widely according to age, location and class.

Concerning Beards: Facial Hair, Health and Practice in England 1650-1900 is published by Bloomsbury