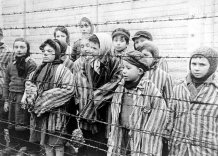 Defining massacres as ‘a holocaust’ diminishes Nazi persecution of the Jews

Labelling mass killing and massacres as a “holocaust” risks downplaying the scale of the Nazi plan to eradicate the Jews and Roma (gypsies), a leading expert on the holocaust says.

Comparing bombings, massacres and even the African slave trade to the murder of 6 million Jews and up to 1.5 million Roma (gypsies) risks diminishing the gravity of the Nazi genocide carried out in the 1930s and 1940s, a book on the holocaust by Professor Jeremy Black argues.

Professor Black, Professor of History at the University of Exeter, says the comparison of the holocaust with other genocides, such as the slaughter of the Tutsi in Rwanda in 1994, is justified.

But in his book The Holocaust: History and Memory he says comparisons with many other episodes of mass killing, “however distasteful and cruel” diminish the magnitude of Nazi persecution of the Jews.

He says the “diminishment” of the word holocaust is unlike holocaust denial but is “in certain respects more insidious” because it “downplays the holocaust by comparison.”

The Exeter University Professor who has studied the holocaust for several decades and published two books on the subject, says it is wrong to compare the organised killing of 6 million Jews during the Nazi period with the Anglo-American bombings of Germany.

Attempts by far-right and mainstream German commentators to characterise the German experience in 1943-45 of heavy Anglo-American bombing and being driven from Eastern Europe as a holocaust where millions of people were killed in concentration camps is “absurd, not least because no genocide was attempted.” Such a comparison “strikes many non-Germans as ahistorical, ludicrous and offensive.”

“The Germans who suffered most were of course German Jews,” he writes. “If attention is moved from the slaughter of the Jews, then the Germans can emerge as one of the peoples who suffered grievously in the 1940s which is a misleading approach that underplays German culpability.”

Professor Jeremy Black, Professor of History at the University of Exeter where he teaches the holocaust, criticises the creeping use of the word “holocaust” to describe “large-scale killing, however reprehensible”.

Professor Black, who has written several books on the slave trade, is wary of defining the Atlantic slave trade as an African holocaust.

Although the suffering of Africans taken from their homes, killed and subjected to appalling conditions should not be underestimated, Professor Black takes issue with defining the slave trade as a holocaust. He says that the aim of the Atlantic slave trade was “to ensure plentiful, pliant and relatively inexpensive labour”. Although this did result in suffering and death of Africans on a grand scale, unlike the holocaust and planned eradication of the Jews, genocide was not the objective of the slave trade.

His book, dedicated to “a branch of my family I never met”, says: “the intention of the slave trade was not to kill Africans, still less to reorder the racial geography of a conquered territory.”

The Exeter University academic says the Nazi “attempt to define and destroy an entire ethnic group and its complete culture represents a different scale and intention of assault, indeed a global assault.”

He supports the use of the word holocaust to describe the Nazi treatment of the Roma (gypsies), up to 1.5 million of whom were killed by the Nazis and their supporters, as well as its use in relation to the “slaughter of the Tutsi in Rwanda in 1994” because of the scale and intentions underlying their murder.

But Black says even academics are guilty of “downplaying the Jewish experience of persecution” by using the holocaust to define other periods of killing and oppression.

He cites a book by Tadeusz Piotrowski, a Professor of Sociology at the University of New Hampshire, entitled Poland's Holocaust: Ethnic Strife, Collaboration with Occupying Forces and Genocide in the Second Republic, 1918-1947. Professor Black says the Professor is guilty of ‘hijacking’ the term holocaust.

“The total racial recasting of Europe with at the least the expulsion of the Jews and eventually their genocidal destruction was a Hitlerian objective not a by-product of the war,” writes Black.

In Australia, the fate of the aborigines has also been explicitly compared to the holocaust. And in New Zealand “holocaust” was used in 1996 in the Waitangi tribunal which investigated the grievances of the Maori in the Taranaki district. The Maori suffered land confiscation, dispossession, oppression and plunder but the comparison with the holocaust was criticised.

In the book, Black explains the various ways that the Holocaust has been remembered, downplayed, and even dismissed as it slips from horrific experience into collective consciousness and memory.

“Crimes against humanity are certainly all too common, and the holocaust was far from unique in that light, but that does not establish an equivalence,” Black says. “The total racial recasting of Europe with the expulsion of the Jews and eventually their genocidal destruction was a Hitlarian objective - not a by-product of the war”.

The Holocaust: history and memory is published by Indiana University Press