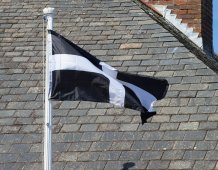 Experts are marking the centenary of a key South West political battle which proved crucial for Liberalism to survive in Cornwall.

On February 25 1922 Isaac Foot won Bodmin in a closely-fought by-election from the Conservatives. It was a much-needed morale boost for the Liberal party in a constituency which had previously been one of their key strong-holds.

The by-election saw the start of the Foot political dynasty. Isaac’s son Michael was leader of the Labour party. Another son Dingle was also a prominent Labour politician and his brother John became a peer in the House of Lords.

Dr Garry Tregidga, from the University of Exeter’s Institute of Cornish Studies, has led research into the election and its impact. The election was fought following the Irish Home Rule on politics, the 1916 split in the Liberal party between the supporters of Asquith and Lloyd George and the decline of the party.

Dr Tregidga said: “This by-election victory had the same impact that the Liberal Democrat victory at North Shropshire had recently. It was a much-needed victory which showed the party they could win. Foot was helped by the fact Labour did not put forward a candidate, and they campaigned for him too. The party was concerned about the vote being split and decided this action was needed to defeat the Conservatives.

“The political background in Cornwall isn’t that different a century later.”

In the media Foot was presented as someone who would stand up for ordinary people and the region, particularly in the Cornish Guardian, then a Liberal newspaper.

Foot fought an energetic campaign in the by-election. Newspapers noted that he was able to cover an extensive area of the constituency on a daily basis. The Western Daily Press reported on 22 February he had ‘covered over 70 miles and spoke in 20 villages’ on just one day.

After World War One the Cornish mining industry collapsed and workers were laid off. The Spanish flu also meant difficulties for many families and Isaac’s campaign argued for more money to help miners rather than fighting “foreign wars” in the Middle East.

The government’s reluctance to offer financial assistance was criticised particularly since there was a perception that tin resources had been exploited for the war effort. The plight of the Cornish miners even featured in a campaign song composed for the by-election, a parody of the Cornish anthem ‘Trelawny’:

With Asquith, Grey – true men are they

The Coalition would not help

Come vote against them, ‘one and all’

And make them think the more

And shall our Isaac win

Yes, high above the Tory din,

Isaac Foot was a parliamentary candidate at Totnes and then Bodmin in the two general elections of 1910. He served as the Liberal Member of Parliament for Bodmin in Cornwall from 1922 to 1924 and again from 1929 to 1935, and as a Lord Mayor of Plymouth in the 1940s.

He was born in Plymouth, the son of a carpenter and undertaker, and educated at Plymouth Public School and the Hoe Grammar School, which he left at the age of 14. He then worked at the Admiralty in London, but returned to Plymouth to train as a solicitor. He set up the law firm Foot and Bowden, which as Foot-Anstey still exists.

Dr Tregidga said: “The Liberals were able to tap into the concerns of discontented voters in an area that felt it was being neglected by central government. The Government had reversed its agricultural policy. Farmers were disenchanted because of a decline in farm prices, while agricultural workers voted Liberal in protest at lower wages. Across the political spectrum there was a view that the Lloyd George Coalition was not effective in its use of public funds. Foot believed he had won because people were bitter and angry at broken promises, at the waste and extravagance, and because the people of that constituency thought that the Cornish miners had been treated with great meanness by the government.”

Another parody of ‘Trelawny’ was composed as a victory song and “vociferously sung everywhere” at celebration parties with village halls. The use of parodies on the theme of ‘Trelawny’ suggest that Foot, though seen initially by some as a ‘stranger’ from across the Tamar, was now being presented as the champion of Cornish interests.

The Observer described how the scenes at the declaration of the result on the Saturday afternoon “beggared description. They were Cornish of the Cornish; the enthusiasm of Nonconformist farmers, of earnest young preachers, of dark-eyed women, and fiery Celtic youth had something religious about it. No such fervour could be seen elsewhere outside Wales”.