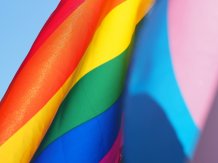 Dr Linge and Professor Funke will help teenagers to analyse historical sources from the early twentieth century to examine how LGBTQ+ people in the past have engaged with environmental issues, including those around climate and weather.

Experts will use history and comedy to empower LGBTQ+ young people to play a central role in climate activism as part of a major project held ahead of the COP26 conference.

A group of teenagers will be inspired by activists from the past, and entertainers, to produce a comedy show with a focus on nature and the environment.

LGBT young people can feel alienated from climate activism, which can be represented by the media as something associated with those who are heterosexual, cisgender, middle-class and white.

Dr Ina Linge and Professor Jana Funke from the University of Exeter, will work with youth workers and members of the YAY! (Young and Yourself) Cornwall LGBTQ+ youth group, run by the Intercom Trust.

The young people, aged between 16 and 18, will work with comedian Siân Docksey to write material for an online comedy gig – suitable for all ages - to be held later this year.

The research is being funded by UKRI and the Arts and Humanities Research Council, and is one of a series of projects around the UK designed to encourage 14 to 18-year-olds to use film, theatre, visual arts and storytelling engage with and contribute to important climate research.

Dr Linge said: “Arguments about climate change often focus on heterosexual families, the next generation, and it’s not always easy for those in the LGBTQ+ community to see themselves within that sort of climate activism. We hope this project will help to empower young LGBTQ+ people to develop their own perspectives on climate change and climate activism.

“Participants will explore the central role that LGBTQ+ people have played in exploring nature, environment and climate in the past. We hope this will help them feel able to carve out their own roles within urgent debates about climate change activism in the present and future.”

Dr Linge and Professor Funke will help teenagers to analyse historical sources from the early twentieth century – held in South West museums - to examine how LGBTQ+ people in the past have engaged with environmental issues, including those around climate and weather. This includes writing by lesbian sexologist Edith Ellis about Cornish seaweeds and seascapes and learning about how gay rights campaigner Edward Carpenter promoted vegetarianism and farming as part of a healthy and sustainable lifestyle

The teenagers will then take part in a three-hour comedy-writing workshop with Siân Docksey. Their material will be used in an online comedy salon featuring a local artist.

Professor Christopher Smith, AHRC Executive Chair, said: “If we are going to come together as a global community to address the climate crisis, we need to ensure that people from all ages and walks of life are engaged with this crucial issue.

“These investments are a testament to the ability of the creative arts, theatre and storytelling to bring complex issues to life, and to bring people together.

“Young people have a particular stake in this because it is their future that is at risk.

“Their engagement in and creative contribution to these activities will lead to a deeper, more meaningful understanding of the need to work towards a more sustainable future.”