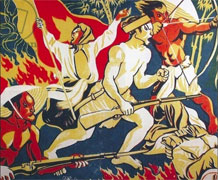 Image of the Vietnamese revolution, 1945, courtesy of Bloomsbury Academic.

Study of violent decolonisation may provide lessons about insurgency today

A new study which examines the causes and consequences of anti-colonial violence following the Second World War may offer insights into current conflicts today in the Middle East and elsewhere.

Academics at the University of Exeter will be re-examining several anti-colonial rebellions, and will trace their legacies in more recent episodes of violence in former colonial societies.

This is among the first studies to compare European colonial responses to armed insurrection, civil disorder and anti-colonial insurgencies with similar instances of conflict today.

Diplomats and non-governmental organisation representatives will be invited to take part in the project. It is hoped the research findings will offer useful insights to those currently working in insurgent conflict zones or affected by violence.

The research team will study anti-colonial violence and rebel movements in the former empires of Britain, France, Portugal and the Netherlands.

Case studies will be produced on the formerly British imperial territories of Malaya, Kenya, Guyana, and Jamaica; French Algeria and Vietnam; Dutch Indonesia; and Portuguese Angola and Mozambique.

The study, Understanding insurgencies – resonances from the colonial past, is funded through a three-year International Network Grant awarded by the Leverhulme Trust.

It is led by Professor Martin Thomas and Dr Gareth Curless of the University of Exeter’s Centre for the Study of War, State and Society (CWSS). They will be working with six other university partners in the UK and overseas: Oxford, Warwick, Glasgow, CNRS Paris, Université de Québec, and KITLV Leiden.

Researchers will share evidence at eight workshops to be held in Europe and North America.

Professor Thomas, a specialist on French Africa, said: “In many of the countries we will be examining imperial responses to rebellion generated mass displacement, refugee outflows and other human rights abuses that exacerbated the original causes of violence.

“At the same time civilians were often targeted by the insurgents, undermining community cohesion and leaving bitter long-term legacies.”

The research team will also investigate the ways in which insurgencies and revolutionary social movements, their propaganda and methods of action in different territories were inter-connected through transnational networks similar to the loose connections between violent anti-state movements today.