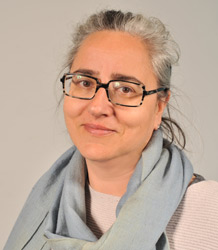 My research and teaching interests lie in the social and economic history, interpreted in its broadest sense, of Early Modern Europe.

My primary area of expertise is the history of Italy (especially the Venetian Republic) and the Mediterranean between the fifteenth and eighteenth centuries. My research has focused on commercial networks and the role they played in the early phases of globalization; on the economic, social and cultural analysis of late medieval and early modern empires and on the early modern development of legal institutions supporting trade. I have also published on commercial litigation and the status of foreigners in civil courts in the medieval and early modern period, the trade between the Mediterranean and the north of Europe, the history of the Venetian dominions in Greece, and on the dialogue between different national historiographies.

ERC Consolidator Grant - Average - Transaction Costs and Risk Management during the First Globalization (Sixteenth-Eighteenth Centuries). Until 2022, together with 4 doctoral candidates, 1 post-doctoral Research Fellow and 7 Visiting Senior Researchers we worked on a large comparative project focused on economic institutions and their impact on economic development. The focus was on a legal instrument – general average (GA) – which underpins maritime trade by redistributing extraordinary costs across all parties engaged in the business venture. See more details at: http://humanities.exeter.ac.uk/history/research/centres/maritime/research/avetransrisk/

You can hear more details on this project at: https://soundcloud.com/university-of-exeter/mariafusaroerc

ERC Starting Grant - Sailing into Modernity: Comparative Perspectives on the Sixteenth and Seventeenth Century European Economic Transition'. Between 2012 and 2014, together with my team - Bernard Allaire, Richard Blakemore and Tijl Vanneste - we worked on the comparative study of contractual conditions and economic treatment of sailors across Europe in the sixteenth and seventeenth century.

Together with Andrea Addobbati (Università di Pisa), thanks to the Small Grants Scheme of the British Academy and Leverhulme Trust, we investigated the international political implications descending from the differences in maritime law between the North and South of Europe in the seventeenth century. A workshop took place in Exeter in November 2015, and the article  “The Grand Tour of Mercantilism: Lord Fauconberg and his Italian mission (1669-1671)” is forthcoming with the English Historical Review

ERC Starting Grant - Sailing into Modernity: Between 2012 and 2014, under the aegis of an ERC Starting Grant, I worked on ‘Sailing into Modernity: Comparative Perspectives on the Sixteenth and Seventeenth Century European Economic Transition’, which involved 3 post-doctoral Research Assistants: Bernard Allaire working on France, Richard Blakemore on England and Tijl Vanneste on the Netherlands.

Several other essays presenting its results have also been published, and my monograph The Making of a Global Labour Market, 1573-1729: Maritime Law and the Political Economy of the Early Modern Mediterranean, is under contract with Cambridge University Press for delivery in 2023.

In the course of the project we developed several resources related to early modern maritime labour, these are available here: http://humanities.exeter.ac.uk/history/research/centres/maritime/resources/sailingintomodernity/

There is also a podcast where I discuss the relevance of the issues at play and the central points investigated by the project, you can find it here: http://humanities.exeter.ac.uk/history/research/centres/maritime/podcasts/

* all these resources are still a work in progress, and the site is regularly updated. More material shall be uploaded once the monograph associated to the project will be published.

My book Political Economies of Empire in the Early Modern Mediterranean: The Decline of Venice and the Rise of England 1450-1700, was published in May 2015 with Cambridge University Press. See: http://www.cambridge.org/sj/academic/subjects/history/european-history-after-1450/political-economies-empire-early-modern-mediterranean-decline-venice-and-rise-england-14501700?format=HB

You can see some reviews here:

Together with Nandini Chatterjee in 2017 I have set up a collaboration project with the Centre for the Study of Social History in Kolkata (India). I then co-organised (with Dr. Prachi Deshpande) the first joint activity in the form of an international workshop on Comparative Methodologies: Microhistory, Global History and the Social Sciences (18-19 March 2019).

I am happy to supervise research on any of my research interests, especially on:

- Early modern European social and economic history, especially history of trade and trading networks and the development of legal institutions connected with the economy

Currently I am supervising the following doctoral candidates:

Sarah Spencer (with Fabrizio Nevola), 'The Impact of the Venetian Republic on the piazze of its subject towns on the Terraferma and the Stato da Mar'

Recently completed doctorates under my supervision:

Lewis Wade, 'Privilege at a Premium: Insurance, Maritime Law and Political Economy in Early Modern France, 1664-c.1710'  (2021) - Winner of the 2020-21 Boydell and Brewer Prize for the Best Doctoral Thesis in Maritime History in a UK University

Edward Fox, 'The social history of pirates in the eighteenth century' (2015)

Joan Abela, 'The impact of the arrival of the Knights of the Order of St. John on the commercial economy of Malta, 1530-1565' - Winner of the 2012-3 Boydell and Brewer Prize for the Best Doctoral Thesis in Maritime History in a UK University.

For the podcast series 'What is wrong with maritime trade?' I discussed the importance of the mutual element underpinning GA in the context of ‘Solidarity in Trade?’, available at https://open.spotify.com/episode/1ylIuGRkOir2u1n8cpLVP1

I have acted as a consultant for production companies (e.g. October Films), and historical documentaries on maritime and naval topics (e.g. BBC series 'Ruling the Waves')

I graduated from the Universita' di Venezia Ca' Foscari, and then moved to Cambridge where I completed my PhD in 2002. After a Junior Research Fellowship at St. Hugh's College at Oxford, I was Assistant Professor at the University of Chicago before moving to Exeter in 2006.