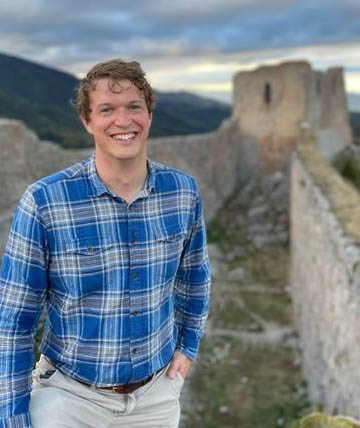 I am an historian of aristocratic government in the High Middle Ages and its intersection with Christian reform movements, particularly the crusades.  My work focusses on the ways in which barons attempted to use their lordship to create an idealised Christian republic, at times through the imposition of military force.

I am currently preparing a major project and monograph for Oxford University Press on the Statutes of Pamiers (1212), a crusader constitution for the Midi.

I am a member of the Centre for Medieval Studies.  My research concentrates on the ways in which governments attempted to realise the ideal Christian republic on earth from the late eleventh to the early fourteenth centuries.  Most work in this area has been directed at the level of royal administration, especially that of King (later Saint) Louis IX of France.  My own interests focus instead on the exercise of government by barons, who are too often overlooked as engines of government and reform.

The crusades were an important vehicle for the communication and implementation of Christian reform in this period, and my work studies these expeditions – both to the Levant and within Christendom – and their subsequent political legacy from this perspective.  Preaching often inspired political prescription and proscription at home before crusaders marched off to usher in Christ's kingdom on earth and save their souls in the process.  Around the Mediterranean, these crusaders and their descendants found themselves ruling over, competing with, and learning from diverse alien communities, whether Christian, Muslim, or Jewish.  Even in western Europe, 'knights of Christ' set out to confront heretics, schismatics, and imperialist partisans against whom they directed reformist principles.  My research therefore explores how the high medieval aristocracy's engagement with the crusades as an expression of reform created a mixture of power, paternalism, and persecution.

I am interested in discussing proposals from potential research students on any relevant subject in my research expertise.  In particular, I would be keen to supervise students working on:

If you are interested in working on a potential doctoral project, please email me a 500-word outline of your proposed topic with your CV so we can start discussing your ideas.

In addition to giving talks on the crusades to school and community groups, I have contributed articles on medieval subjects to the popular Spanish military history magazine Desperta Ferro and the Roman Catholic monthly devotional Magnificat.  I have also advised the Oxford Story Museum on their permanent exhibition dedicated to, among others, the medievalist, children's author, and Christian apologist Prof. C.S. Lewis.

'The Albigensian Crusade, Heresy, Simon V of Montfort and the Statutes of Pamiers', The War and Diplomacy Podcast Series, Lancaster University

After completing my undergraduate studies in history and English at the Virginia Military Institute, I won a Rhodes Scholarship to Hertford College, University of Oxford, where I completed my D.Phil. under the supervision of Prof. Christopher Tyerman.  My thesis on Simon of Montfort and baronial government was adapted for publication with OUP and appeared in 2017.  I spent two years at the University of East Anglia as a Leverhulme Early Career Fellow before arriving at the University of Exeter in 2019.