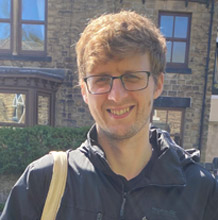 I am an historian of post-war Britain, with a particular interest in political, social and cultural histories of health and health services.

I completed my PhD at the University of Warwick in 2014, after which I joined the University of Exeter as part of Professor Mark Jackson's Wellcome Trust Senior Investigator Award, 'Lifestyle, health and disease: concepts of balance in modern medicine'. This research provided the basis both for an edited volume (Balancing the Self: Medicine, Politics and the Regulation of Health in the Twentieth Century (Manchester University Press, 2020), co-edited with Mark Jackson), and my first monograph - Managing Diabetes, Managing Medicine, (Manchester University Press, 2019) - which traced how new forms of chronic disease management developed in the post-war period and intersected with projects for managing medical professionals in the NHS.

I am currently working on two projects.

The first is a history of time and care in post-war British general practice, tentatively titled Hurry Up and Wait. This work forms part of the Wellcome Trust Collaborative Award, "Waiting Times", an interdisicplinary project examining what it means to wait in contemporary health care led by Professor Laura Salisbury (University of Exeter) and Professor Lisa Baraitser (Birkbeck).

The second, which forms part of my work as Lecturer in Medical History in the Wellcome Centre for Cultures and Environments of Health, is a history of commuting and wellbeing in late twentieth-century Britain. This project will situate concerns about commuting's effects on health in broader cultural, political and environmental contexts and examine the ways in which commuters themselves experienced and made use of their daily travel to work.

My general research interests are in the histories of:

I am an historian of medicine and post-war Britain, and my research interests have predominantly been in histories of chronic disease, medical professionalism, medical research, and the welfare state (particularly the National Health Service). These subjects were central to my first book, Managing Diabetes, Managing Medicine (Manchester University Press, 2019).

The project examines what it means to wait in contemporary healthcare, and within this I am writing a history of time, care and waiting in post-war general practice, tentatively titled Hurry Up and Wait. Through an analysis of temporal conflicts and practices that developed in primary care between the 1940s and 1970s, I examine the ways in which general practice was transformed through its incorporation into the NHS, and became a site through which the contradictions - and class, gender, and racial inequalities - of post-war welfare were often materialised. Moreover, by situating issues of time and waiting historically, Hurry Up and Wait looks to complicate narratives of time in "Western" modernity that have focused primarily on acceleration, time-compression and the clock. Rather, it explores the plurality of temporalities operative in post-war primary care (particularly those which were entwined with its "modernisation"), and pays particular attention to both their affective lives and interaction with the uneven and contested economisation of time under the NHS.

Alongside this work, as part of my role as Lecturer in Medical History in the Wellcome Centre for Cultures and Environments of Health, I am also starting a new project, unimaginatively titled Commuting Post-War Britain. Drawing on a burgeoing interdisciplinary literature on space, time and mobility, this project will explore the historical interconnections between daily travel for work and individual and social wellbeing in the second half of the twentieth century. Through its focus on everyday mobility, the project will (I hope) generate new insights into social, cultural and political responses to the changing geographies of Britain's post-war urban environments, as well as on the health anxieties and inequalities of Britain as a post-imperial, deindustrialising nation.

I completed my PhD at the University of Warwick in 2014, having also studied there for my undergraduate (2006-2009) and Master's (2009-2010) degrees in history and the history of medicine respectively. During my doctorate, I was fortunate enough to undertake an ESRC-funded internship within the Scottish Government (2012) and to work closely with the Industry and Parliamentary Trust as an author of their health memos (2011-2012). I joined the University of Exeter shortly after finishing my PhD, working as a post-doctoral fellow on two large Wellcome Trust-funded projects before joining the Wellcome Centre for Cultures and Environments of Health in September 2019.