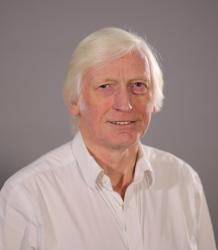 Research interests include the history of the Hitler and Stalin dictatorships, the Second World War, air power in the twentieth century, German history from c 1900. Research supervision can be offered in all these areas and in related themes and subjects.

Research interests have included many aspects of the history of the Third Reich and the Second World War and, more recently, of Stalin's Soviet Union and the Soviet war effort. He is currently working on a book which explores the development of a morbid culture in inter-war and wartime Europe and examines the links between that culture and the nature of war, civil war and genocide. He is currently preparing a research project on bombing and its impact during the Second World War which will look comparatively at the experience of bombed communities in Britain, France, Italy, Germany and the Soviet Union. He is also continuing research on aspects of the German economy under Hitler.

He was awarded a one-year fellowship from the Leverhulme Trust in 2010 for his bombing book project, and organised the conference 'Bombing, States and Peoples' in 2009.

Research supervision can be offered generally in the field of the Hitler and Stalin dictatorships, the Second World War (causes, course and consequences - any aspect of its history), air power history, German history from c.1900.

Recently supervised theses include: a study of German/British Catholic anti-Semitism; exploitation of Soviet manpower on the eastern front; German conservative intellectuals in 1920s Germany; eco-fascism in Britain and Germany. Current supervision at Exeter includes: a study of the Soviet-German friendship society.

Regular contributor to radio and television. Documentary series adviser on The Road to War (1989), Russia's War (1996), The People's Century (1994). Currently historical adviser for a German film on the bombing of Dresden. Undertakes international TV consultancy work on Hitler and World War Two.

Currently planning a major conference on bombing in the Second World War to be held at the University of Exeter in September 2007.

He is a member of the Peer Review College of the AHRC, reviews grants for the Leverhulme Trust, and is a Fellow of the British Academy.

Editor of The Times History of the World.

Richard Overy (b. 1947) was educated at Caius College, Cambridge. He taught at Cambridge from 1972 to 1979 at Queens' College and from 1976-79 as a University Assistant Lecturer. From 1980 to 2004 he taught at King's College, London where he was made professor of Modern History in 1994. He is a Fellow of the Royal Historical Society (1977), Fellow of the British Academy (2000) and Fellow of King's College (2003). In 2001 he was awarded the Samuel Elliot Morison Prize of the Society for Military History for his contribution to the history of warfare. In September 2004 he took up appointment as Professor of History at the University of Exeter.