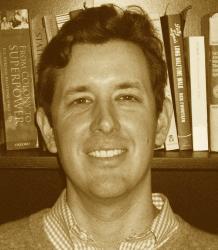 I specialise in the intersection of British and American imperialism within the broader history of globalisation since c. 1800. I am particularly interested in comparing and contrasting the British and American Empires from the mid nineteenth century and, more broadly, in exploring how political economy, gender, humanitarianism, and ideology have shaped global imperial expansion. I am currently working on a book - under advance contract with Princeton University Press - exploring the intersections of global capitalism, anti-imperialism, and peace activism from the mid-nineteenth to the mid-twentieth century.

I believe that connecting the past with the present is an essential part of a historian's craft. I am the co-director (with David Thackeray and Andrew Dilley) of the History and Policy Global Economics and History Forum in London, and contribute to the Mainz-Exeter Global Humanitarianism Research Academy. My commentary on historical and contemporary global affairs has appeared in the Washington Post, the New York Times, NBC, the BBC, the Conversation, the Australian, History Today, Newsweek, and Time, among others. I am also the editor of the Imperial & Global Forum, the blog of the Centre for Imperial & Global History. You can follow me on Twitter @MWPalen

My research focuses on the intersection of globalisation and ideology within the history of Anglo-American imperialism. I am particularly interested in comparing and contrasting the British and American Empires from the mid nineteenth century onward. More broadly, I am interested in projects that explore how ideology and the international political economy have shaped global imperial expansion. My first book, The 'Conspiracy' of Free Trade (Cambridge University Press, 2016), examines how the ideological conflict between free traders and economic nationalists reshaped Anglo-American party politics and imperial expansion in the mid to late nineteenth century. This ideological battle reverberated throughout the globe, I argue, and laid the foundations for today's global political economy. My next book project, forthcoming with Princeton University Press, examines the free trade movement’s global struggle for world peace and, conversely, explores the complex relationship between economic nationalism and empire building in the first half of the twentieth century.

I welcome applications from students interested in my research areas, including those wishing to study remotely from the US.

Possible research topics and themes include:

Co-Director (with David Thackeray and Andrew Dilley), History & Policy Global Economics and History Forum, (2016-). The forum brings together academics, business groups, policy makers and the public interested in how understandings of historical trade relations can inform current policy debates through policy workshops and public seminars, in collaboration with History & Policy (King's College, London, and Cambridge University) and the Centre for Imperial and Global History at the University of Exeter.

Co-editor (with Andrew Thompson, Johannes Paulmann, and Fabian Klose), Online Atlas on the History of Humanitarianism and Human Rights (2016-present).

Team Member, Global Humanitarianism Research Academy (2015-present), collaborative summer programme for advanced PhD students and early postdocs working on histories of humanitarianism and human rights, hosted by the Centre for Imperial and Global History at the University of Exeter, IEG Mainz, and the ICRC.

"These Persuasive Maps Want You To Believe," Citylab/Atlantic Monthly (27 Dec. 2018).

"Decisions More Than A Century Ago Explain Why the US Has Failed Puerto Rico in its Time of Need," Washington Post (3 Oct. 2017).

"Trump and the Return of Economic Nationalism," Globalist Magazine (30 July 2016).

“Is Global History Suitable for Undergraduates?” Imperial & Global Forum (12 May 2014).

I am a Fellow of the Royal Historical Society and a Fellow of the Higher Education Academy. Previous to arriving at the University of Exeter, I studied at the University of Texas at Austin, where I completed a BA in the Classics (2003), an MA in History (2009), and a PhD in History (2012) under the supervision of H. W. Brands and A. G. Hopkins. I have previously taught history at Tufts University and have been a Postdoctoral Fellow at the U.S. Studies Centre, University of Sydney, where I was then a Research Associate in U.S. Foreign Policy (2012-15). I have also been a long-term fellow at the Massachusetts Historical Society (2022), and a research fellow at the Harry Ransom Center (2017), Smith College (2015), the Historical Society of Pennsylvania (2015), Stanford's Hoover Institution Library and Archives (2015), a Visiting Postdoctoral Fellow at Oxford's Rothermere American Institute (2015) and at Yale's International Security Studies, and have been awarded the 2013-14 W. A. Williams Junior Faculty Research Award by the Society for Historians of American Foreign Relations, and the Samuels Young Scholars Award by the History of Economics Society. I have previously been a Departmental Fellow, University of Texas at Austin (2011); Marc Friedlander Fellow, Massachusetts Historical Society (2010-11); Research Fellow, New York Public Library (2010-11); Liberal Arts Graduate Research Fellow, University of Texas at Austin (2010); Canadian Embassy Doctoral Fellow (2010-11); and a Churchill Scholar of British Studies, University of Texas at Austin (2009-11). My commentary has featured in the New York Times, the Washington Post, NBC, the BBC, the Australian, the Globalist Magazine, and Foreign Policy in Focus, among others. I am also the editor of the Imperial & Global Forum, the blog of the Centre for Imperial & Global History @ExeterCIGH, and co-director of the Global Economics and History Forum (History & Policy, London @HandPGlobal). You can follow me on Twitter @MWPalen

My academia.edu profile containing links to my publications is available at: http://exeter.academia.edu/MarcWilliamPalen