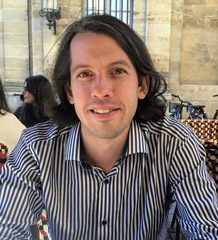 My teaching and research interests lie in the history of western Europe (in particular, England, Germany and northern Italy) in the early and high Middle Ages. My books include Kingship and Consent in Anglo-Saxon England (Whitfield Prize 2014 proxime accessit); King Æthelred 'the Unready' (Longman-History Today Prize 2017; Labarge Prize 2017); and Forgery and Memory at the End of the First Millennium (recently published by Princeton University Press). The latter project was generously supported by an AHRC leadersip fellowship in 2017–19.

Future projects include a popular history of the Normans, to be published by John Murray (UK) and Pegasus (US) in spring 2022; and an edition of the Anglo-Saxon charters from continental houses, for the British Academy Anglo-Saxon Charters series.

I can be found on Twitter as @DrLRoach. For trade writing, I am represented by Laurie Robertson at Peters Fraser + Dunlop.

My background lies in the study of kingship and royal governance, particularly in using charters and other documentary sources for this purpose. Most of my early work was on later Anglo-Saxon England, but I increasingly work on France, northern Italy and (in particular) Germany, and the rich archival materials preserved there. I also have an active interest in modern debates about feudalism and the so-called mutation féodale ('Feudal Transformation/Mutation').

I am happy to supervise students working on the religious and political history of the British Isles and western Europe between c.800 and c.1200, particularly in the following areas:

I enjoy sharing my knowledge and enthusiasm with a wider audience. I have spoken to a variety of local groups over the years, including the Exeter branch of the Historical Association, the Exeter Cathedral, the Boniface Link Group (Crediton) and the South West Trust. I also organised an exhbition on 'Forging the Past in Medieval Exeter' at the local Cathedral in May 2019.

Outside the South-West, I have spoken to audiences from Malmesbury in Wiltshire to Syndey in Australia, inlcuding the BBC History Weekend and the Sherborne Historical Society.

I regularly write for a wider audience, publishing articles and reviews in History Today, BBC History Magazine, the Literary Review and the Times Literary Supplement. I have also been quoted in the Mail Online and Independent, and appeared on BBC World and BBC Radio 4's When Greeks Flew Kites, discussing medieval promises and modern misuses of the Middle Ages.

I studied at Trinity College, Cambridge, and the Ruprecht-Karls-Universität Heidelberg, completing my PhD at the former in 2011. My doctoral work focused on royal assemblies in later Anglo-Saxon England and a revised version of my thesis was published by the Cambridge University Press in October 2013. From 2011-12 I held a Research Fellowship (Title A Fellowship) at St John's College, Cambridge. In 2012 I took up a lectureship at the University of Exeter.