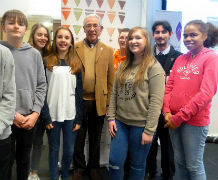 A Holocaust survivor who witnessed the horrors of Nazi persecution of Jewish families shared his experience with Devon pupils and students as part of a memorial event at the University of Exeter.

Ernest Simon saw prayer books and Torah scrolls burnt in Vienna and escaped to the UK on Kindertransport just before the outbreak of World War II thanks to the desperate efforts of his father.

He told University of Exeter students and pupils from Exeter School, Chulmleigh Community College and Park Community School in Barnstaple about his childhood as part of conference held to mark Holocaust Memorial Day.

University of Exeter experts also led seminars on the Nazi regime, treatment of Germans and Austrians living in Britain during World War II and Jewish religious responses to the Holocaust.

Those at the conference were able to learn about modern day genocides in Darfur through a display of drawings by Darfuri refugee children. At the end of the day attendees read poems and wrote pledges on a “reflections” board.

The event, on 8 February, was organised by first-year history student Barnabas Balint, a Youth Champion Board Member for the Holocaust Memorial Day Trust. The aim was to educate young people about past atrocities and also to give them experience of university life.

Ernest Simon, who speaks in schools and colleges about his family’s experiences for the Holocaust Educational Trust, came to England alone in 1939 but was eventually reunited with his parents and brother. The family settled in Leeds, but his father was interned on the Isle of Man for a year as an “enemy alien”. It wasn’t until 1942 that they could all live together. Ernest and his brother both studied at Leeds University.

Teachers who attended were given resources so they can continue discussions about the Holocaust with their pupils, who are in Year 9, 10 and 11.

Barnabas, who hopes this will now be an annual event at the University of Exeter, said: “I am grateful to everyone who has helped make this conference such a success, and extremely proud of all the students from across Devon who attended.

“The students were all very mature and engaged really well with the challenging topic at hand. Speaking to them on the day, and reading the pledges they made, confirmed that it was a truly worthwhile experience, one that all have learned from and been inspired to work for a safer, better future.”

Karen Pollock MBE, Chief Executive of the Holocaust Educational Trust, said: “The Holocaust Educational Trust educates and engages students from across the UK, from all communities, about the Holocaust and there can be no better way than through the first-hand testimony of a survivor. Ernest’s story is one of tremendous courage during horrific circumstances and by hearing his testimony, students will have the opportunity to learn where prejudice and racism can ultimately lead.

“At the Trust, we impart the history of the Holocaust to young people, to ensure that we honour the memory of those whose lives were lost and take forward the lessons taught by those who survived.”