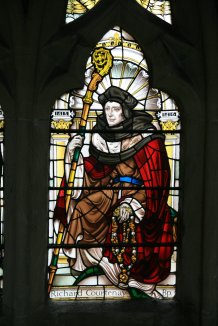 Family secrets uncovered by the new Earl of Devon, Charlie Courtenay - including an ancestor so close to Henry V that the King had him buried in his Royal tomb in Westminster Abbey – are revealed in a new exhibition at Powderham Castle.

Details of the life of the Earl’s 15th-century ancestor, Richard Courtenay, a childhood friend of King Henry V and, as an adult, his closest adviser, are presented to visitors this season. On display in the Castle, which opened its doors to visitors this month, are medieval manuscripts from the Courtenay archives never before seen in public. The manuscripts, some of which date back nearly 700 years, shed fresh light not only on the history of the Courtenay family, but the history of Devon and the West Country.

James Clark, Professor of History at the University of Exeter, has translated the documents newly discovered by the current Earl and believes Richard Courtenay played the crucial role in preparing Henry V for kingship and the victorious Agincourt campaign in 1415. Records show that the influence of Courtenay was crucial in transforming the wild Prince Hal into the English national hero that Henry V became, and the circumstances surrounding his death and burial reveal that their relationship was particularly intimate.

Known for his intellectual brilliance, diplomatic skills and notable good looks, Richard Courtenay was referred to in contemporary poems as ‘beautiful youth’, a ‘second Plato’, and ‘the glory of Devon’. He knew the young Prince Hal at Oxford and at the court of Richard II, and became a skilled diplomat and close adviser to the future King. Unusually for the heir to a great estate, Courtenay was made a Bishop and never married.

In Shakespeare’s play Henry V, Courtenay plays a cameo as the diplomat to the French court, famously returning with the gift of tennis balls that spurred Henry V to launch the Agincourt campaign. In truth, Courtenay was key to Agincourt – he organised finance for the campaign and accompanied Henry to France. There, tragically, he died of dysentery in the King’s presence at the siege of Harfleur – the highest ranking noble to be killed in the terrible outbreak that risked the entire campaign. Distraught by the death of his closest friend, the King washed Courtenay’s feet and ordered his body returned to London and buried in Henry’s own tomb in Westminster Abbey, where he still lies.

Professor Clark said: “King Henry V is best remembered as macho man-of-action; on screen he has been seen either as the proverbial knight in shining armour – as played by Laurence Olivier – or the blood-and-mud splattered fighter – as depicted by Kenneth Branagh. The story of his remarkable friendship with Richard Courtenay reveals him to be a much more complex character, who challenges many of our assumptions about medieval England’s ‘age of Chivalry’.”

Among the documents that have shed new light on the history of the family at the time of Courtenay is a recently rediscovered medieval family tree tracing the Courtenay’s origins from the Battle of Hastings to until the 15th century. The beautifully illustrated Courtenay Cartulary, written by hand in Latin, is one of the earliest examples in Europe of a family tree, illustrated with branches and leaves. It was returned to Powderham by the current Earl, after sitting in a local Records Office for decades.

Powderham Castle is home to Charlie, who became Earl of Devon in 2015, his wife A. J. and their two children. As well as managing Powderham, Charlie works as a lawyer, but is fascinated to research his family’s long history and to make it available for the community to discover.

The new exhibition, curated by Professor Clark, includes a state of the art digital render of the Cartulary, for all to use. Visitors also can see the Cartulary, a parchment codex first assembled at the time of the Black Death, containing a very early family tree and a chronicle of the medieval Courtenays richly illuminated with coats of arms in rare gold leaf; a beautifully painted family chronicle dating from the Dissolution of the Monasteries; an early prayer book which dates from the time of King James; a hand written account of the Courtenays compiled at the time of the Civil War; and the account of the Courtenays and their place in ancient European history by Edward Gibbon, the best-known, and best-selling historian of 18th-century Britain.

Charlie Courtenay, the Earl of Devon, commented: “We are excited to share these discoveries and the important research by James Clark and the University of Exeter. I was amazed to discover both the Cartulary and the Richard Courtenay story within our first year back at Powderham. Both treasures have lain hidden for centuries, and together they throw a remarkable new light on local and national history. Through the Cartulary, we learn amazing new detail of Devon’s glorious medieval history; through Richard’s story, we gain a radical new understanding of one of our greatest medieval monarchs. In this era of ‘fake news’ and ‘alternative facts’, it is an honour to unearth ancient ‘true facts’ and to fulfil the ancient Courtenay motto: ‘What is true is right.’”