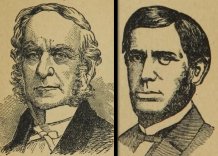 Victorian view: On the left "honesty", on the right "cold-blooded"

The Victorians may have a reputation for prudery, but new research shows that 19th Century manuals contained explicit sex and flirtation advice, including on how “prolong a honeymoon”, as well as tips on how to spot a suitable husband by the shape of his nose.

Dr Sarah Jones, a historian at the University of Exeter, has unearthed Victorian dating advice that warns men against women with “false curls” and “false bosoms”.

Manuals which were widely available in the Victorian period advise women how to write an effective love letter, including “an ardent declaration”, and how to flirt surreptitiously using hats, gloves, handkerchiefs and by positioning stamps on envelopes.

A guide on how to spot a decent husband advises women to “look for a large nose” (which indicates a “long head and a strong mind”), a broad nose (indicating large passageways to the lungs and vital organs, suggesting “hearty animal passions”), a sharp nose (indicating a quick, clear, penetrating mind, as well as love, generosity, and moral sentiment), or a Roman nose (often belonging to a man with “strong passions and a love of debate”).

Flat noses, however, suggest a “flatness of mind and character” and blunt noses “obtuse intellects, sluggish feelings, and a soulless character”.

Some of the dating advice, which was produced in Britain and America, may prove valuable today. Victorians suggested: “Avoid bad breath at all costs, don’t pick your nose, stick your fingers in your ears, or scratch anywhere ‘vulgar’.”

It suggests trying not to look bored on dates and says do not “drum your fingers, rub your hands, yawn, or sigh aloud”.

Dogs and children should never be taken on a date in Victorian times, as this would be “altogether vulgar”.

One guide adds: “If a man has invited a woman to a party it is his job to take care of her – he should introduce her to everyone, escort her to the buffet, and provide for all her wants. However, he should never pour her gravy without permission.”

The manuals studied by Dr Jones also suggests that men should never offer ladies expensive gifts, in case it looks like he is trying to buy her. If they are engaged he may buy her gifts, but they must be presented with no ceremony whatsoever.

The Modern Art of Making Love, 1900, is among the practical manuals on sex, wooing, courting and marriage studied by Dr Jones for her next book. They were mass produced in Victorian times, and were often advertised in the back of magazines and newspapers.

Dr Jones said: “Despite our ideas about Victorian prudery, our 19th century ancestors were just as concerned as us about dating the right people, marrying well, and having good sex – in short, they were probably more modern than you think.

“Many of these texts were written for people who were quite young – just starting to date or to think about getting married, or else newly wedded and confronted with married life for the first time.

“Some were aimed specifically aimed at women, and include specific instructions about finding a good husband, running the home, and raising children.

“Though we don’t know exactly who followed these tips or how successful they were, the manuals would surely have been an important source of information about topics around sex, love, and marriage at this time.”

Victorian tips on how to spot a good man: