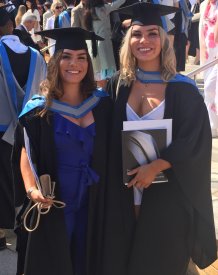 Talented twins have graduated with the same degree from the same university – after playing in the same championship-winning rugby team as students.

Sian and Jasmine Jeffreys originally moved from Canada to spend just one year at the University of Exeter, but liked it so much they chose not to return. Both achieved a 2:1 in history.

The sisters have found best friends for life during their time in Exeter, as well as discovering their love of rugby and English pubs. Despite being new to the sport when they arrived, they helped steer the University of Exeter women’s rugby union team to be British university champions for two years in a row. The team is ranked as number 1 in the British university rankings.

Sian and Jasmine are looking forward to going back to Canada to see friends and family now they have graduated, but they hope to return to the UK to work or study in the future.

Sian said: “Our parents had studied in the UK and encouraged us to do the same. They enjoyed it because of the friends they made, and this has also been our experience. We chose Exeter because of its sporting reputation and because it’s near the sea. It is a smaller place then we were used to, but more sociable than our other university.”

Sian and Jasmine had completed two years of their degrees at the University of Victoria near Vancouver before they came to Britain, and took another three years to complete the correct modules to get their University of Exeter degrees.

Jasmine said: “We’ve not ever been apart for more than a week, so although we thought about going to different places for our year abroad, it was an easy decision for us to decide to go to the same place. Being together has stopped us from feeling homesick, and has helped make being thousands of miles away from home less daunting. We enjoy each other’s company and have the same interests.”

Sian said: “It has felt so natural being in Exeter, it’s always felt like home and we’ve made the best friends here, people we hope we will know all our lives. We’ve enjoyed the different culture in the UK, the way people socialise and how friendly people are.”

Sian and Jasmine had played soccer in Canada, but decided to switch to rugby – on the recommendation of their parents – when they arrived in England. Both were forwards on the women’s 1st team.

Jasmine said: “Straight away we fell in love with the training programme and the coaching staff. At home we weren’t that good at rugby and didn’t play it much, but in Exeter we improved thanks to brilliant coaches who invested in us. We could never have imagined we’d be champions, playing at Twickenham. It was extra special because our dad was able to come and see us play, and very emotional for us all when we won.”

Sian was also a member of the University of Exeter rugby 7’s team, which became British university champions this year. She said: “We have a natural chemistry when we play together, I can hear Jasmine call for the ball really well and we always seem to know where each other are on the field. But as a team we were like a family – many of us lived together – so that was the secret to our success.”

Playing top-level university rugby means Sian and Jasmine spent every weekday in the gym, training and having their playing analysed by coaches. But there was also time for the team to socialise, often in home-made fancy dress costumes. The twins also worked at Sandy Park, the home of the Exeter Chiefs rugby club.

Sian and Jasmine hope to do more travelling in the future. Their parents Michael, a director of a non-profit organisation which supports young people, and Carolyn, a college teacher, and their brother David, all travelled to Exeter to watch their graduation.