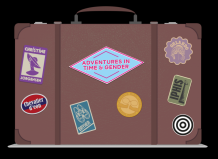 Adventures in Time and Gender is a quirky drama in which nothing is taboo and gender, science and history are questioned.

A new podcast takes listeners on a moving and inspiring journey through the ages as they time-travel to explore transgender history.

Adventures in Time and Gender is a quirky drama in which nothing is taboo and gender, science and history are questioned. Listeners are invited to join a talking suitcase and their curious non-binary companion on a moving odyssey through time, space and Ikea to uncover transgender history.

Adventures in Time and Gender was made by an all-trans/non-binary creative team, led by filmmaker and writer Jason Barker (A Deal With The Universe) and directed by artist and comedian Krishna Istha. An all-star team of performers, including Travis Alabanza (Burgerz), Luke Tyler Cunningham (I May Destroy You), Tallulah Haddon (Kiss Me First/Black Mirror Netflix), Mzz Kimberley (The Finellis), Emma Frankland (We Dig), showcase the history of sexual science and trans history in Western Europe and North America. The drama features sound design by Jo Jackson and music by The Mollusc Dimension.

To develop the script, Jason Barker and a team of young transgender and non-binary people collaborated with researchers from the University of Exeter and Portsmouth University as well as charity Gendered Intelligence to investigate Western trans history and the history of sexology.

With the support of the academics, the young people participated in historical workshops, conducted oral history research, and participated in a writers’ room in order to gather the relevant and much needed research to develop and shape the drama podcast and website. They explored a wide range of historical materials from autobiographical accounts of trans and non-binary people living at the start of the twentieth century to photos from inside the first Institute for Sexual Science in 1920s Berlin.

Emma Frankland, who plays the Suitcase in Adventures in Time and Gender, says: “Working on the podcast was a total dream. It is so rare for a project about trans lives to have been written, directed and fully supported by trans people in every aspect - this brought a lot of joy. I think it's brilliant that the project was instigated and led by young trans people, demanding access to our history. I hope this is the start of many more trans-led projects!"

The podcast begins with a young non-binary person on a quest to uncover transgender history. Along the way, they find a talking suitcase full of historical fragments which hint at a past largely unknown. Following these leads, and through the magic of time travel, our narrator discovers a rich legacy of trans experiences that includes encounters in queer bars in 1920s Berlin, conversations on the streets of 18th-century London and journeys into the deepest recesses of history. The young narrator also explores how trans experiences have been framed by encounters with medicine and science as they encounter famous sex researchers like Magnus Hirschfeld or Alfred Kinsey in their clinics, in Wetherspoons and in 21st-century Croydon.

Jason Barker, the writer of Adventures in Time and Gender, said: “Everyone has been trying to find ways to connect during this pandemic. I've been lucky enough to be able to connect online with a group of trans and gender diverse young writers to work on something as positive and creative as our podcast script. It was a powerful experience for all of us, to find connections to trans people of the past. Giving voices to those characters and then having them brought to life by the performers was our way of honouring our shared history.”

CEO of Gendered Intelligence, Dr Jay Stewart said: "For our young members at Gendered Intelligence to collaborate with such a range of talented and creative trans and non-binary professionals provides an important and life changing experience for them. What's more, through working with the academics and learning that trans people have always been here, this provides the foundation for trans and gender questioning people to find a deep sense of pride in who we are and what we wish to become. This is what Gendered Intelligence is all about."

Professor Kate Fisher from the University of Exeter said: “It has been a privilege for us to collaborate with such a talented team of creative writers, performers and young people, and witness the inspirational power of history. We are really excited to share our exciting drama podcast, to introduce listeners to so many rich and diverse trans lives and to inspire critical thinking about medical and scientific ideas”

Professor Jana Funke from the University of Exeter said: “Adventures in Time and Gender reveals and celebrates the existence of trans people in the past. It uncovers the richness of trans history while also drawing attention to the persistent erasure of trans voices. The drama asks vital questions about how useful it is to have labels to describe gender and sexual identities and who has power and authority when it comes to defining gender and sexuality.”

Dr Catherine McNamara, Head of School (Art, Design & Performance) at the University of Portsmouth, stated: “With a brilliant creative team we have something wonderful here. The opportunity to employ so many trans, nonbinary and gender diverse performers and creatives and showcase their talents is fantastic. I'm very excited to have been a part of this project!"

The two-year project was funded by the Wellcome Trust: