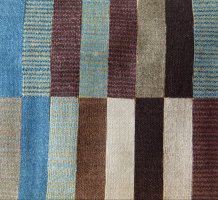 The sample book contains 2,475 pieces of fabric made in the county in the 1760s. It has been unused for hundreds of years, so the colours and patterns remain vibrant.

The discovery of thousands of pieces of 18th century fabric has given historians a rare glimpse into fashion hundreds of years ago.

Experts are analysing the most extensive surviving collection of Devon-made cloth, discovered in one of the largest London-based archives of its kind.

The sample book contains 2,475 pieces of fabric made in the county in the 1760s. It has been unused for hundreds of years, so the colours and patterns remain vibrant.

Cloth production was the single greatest industry in Devon from 1300 to 1800, with Exeter internationally renowned for its manufacture and trade. Until now there was little evidence of the quality, range and vibrancy of cloth made in the city at this time. Cloth books were common during the period but few survive.

The Pattern Book of a Wool Merchant with Connexions to Exeter was found by Dr Todd Gray, from the University of Exeter, while looking at other collections held by the City of London Corporation-owned London Metropolitan Archives. Experts from the archives have now conserved the book, and its pages have been digitised.

The book was made by Exeter merchant Claude Passavant. The fabric finished by his workforce in Exeter was exported to Italy, Spain, Portugal, the Netherlands and Germany. The book was purchased by staff at the City of London Corporation in 1955 as it was believed to have belonged to a London merchant. Every sample, thought to be cloth for clothing, is dated and the cover is inscribed "Patterns from 25 March 1763 to 30 May 1764".

Claude Passavant was a Swiss Huguenot émigré who bought a London carpet workshop in 1755 and brought many of the weavers to Exeter, making the city briefly famous for carpet production, with designs influenced by those in France. Three Passavant carpets can be found in country houses across England.

Professor Catherine Rider, from the University of Exeter, has been working with Dr Gray to analyse the book. Professor Rider, who is honorary editor of the Devon & Cornwall Record Society, said: “This is perhaps the greatest archival discovery for Devon in a generation. Finally we know what Devon cloth looked like and why it was so highly prized across Europe. It is so incredible that the colours of the cloth are still so vivid. We are confident they look as they would have done a hundred years ago.”

Dr Gray said: “The cloth trade was so important during this era, and Passavant would have used the book as he sold his products nationally and internationally. We don’t know who later owned it, but luckily for historians it can’t have been opened or used much.

“It is rare as a historian to find such a rare and well-preserved document, particularly by accident. I decided to examine other items with a Devon connection after looking at some Royal Clarence Hotel papers in the archives, and just couldn’t believe it when this was among them.”

Dr Gray hopes the book will be on public display in Exeter next year. It is reproduced in a new book, accompanied by analysis from expert on the fabric industry in Devon and other parts of England, which will be published next year.

“My colleagues and I hope that this remarkable book, found in the extensive collections of our London Metropolitan Archives, will provide some valuable insights into fabric production over 250 years ago.

“Our conservators take great pride in how they protect and store the books, documents, photographs and other items in the archives and the condition in which this rare book was found certainly seems to bear this out.”