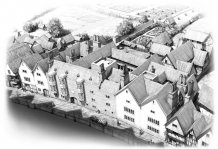 The magnificent London mansion of Thomas Cromwell has been revealed for the first time in an artist’s impression, following a new study which examines the building in unprecedented detail.

Dr Nick Holder, a historian and research fellow at English Heritage and the University of Exeter, has scrutinized an exceptionally rich source of information, including letters, leases, surveys and inventories, to present the most thorough insight to-date on “one of the most spectacular private houses” in 1530s London.

Published in the peer-reviewed Journal of the British Archaeological Association, his findings – which have informed the artist’s impression created by illustrator Peter Urmston – include floor plans for the mansion, which had 58 rooms plus servants’ garrets, and a large garden.

The plans have been released before but the evidence behind them hasn’t been presented until now.

Together with an accompanying room-by-room analysis of another of Cromwell’s London homes, itprovides a fascinating new insight into the life and personality of a man who was one of the architects of the English Reformation and helped engineer the annulment of Henry VIII’s marriage to Catherine of Aragon, allowing him to marry Anne Boleyn.

Cromwell, who as Henry VIII’s henchman was the most powerful man in England, still captures the public imagination – and inspires novels, including Hilary Mantel’s award-winning Wolf Hall series, plays and TV series – today, almost 500 years after his death.

The mansion, next to the Austin Friars monastery in the City of London, cost Cromwell at least £1,600 to build, including around £550 on the land.

Construction began in July 1535 and, like many building projects, there were hitches, including a delay in October the following year when the 80-strong team of workmen was sent to Yorkshire to fight the rebels of the Pilgrimage of Grace uprising.

Cromwell also seems to have undertaken a “land grab”, confiscating a 22-foot strip of land to enlarge his garden, which may have had a bowling alley and tennis court.

The mansion, which boasted bedding made cloth of gold, damask and velvet, acted as a family home, an administrative base and a venue for entertainment.  It may even have been designed in the anticipation, or perhaps fear, of a visit from the king.

Prestigious visitors would have been guided up the large stair tower to one of the sumptuous first-floor halls, the parlour or the ladies’ parlour. The heated halls were decorated with tapestry hangings and one had three distinctive oriel (bay) windows.

The mansion was also a store for Cromwell’s personal armoury – in reality enough for a small army.  This included several hundred sets of “almayne revettes” (German plate armour for infantry), nearly 100 sallets and bascinets (head-pieces and helmets) and weaponry including 759 bows, complete with hundreds of sheaves of arrows.

Cromwell would, however, have had little time to enjoy his spectacular new home before he was executed for treason in 1540.

He had moved to the mansion from a 14-room neighbouring townhouse, for which he probably paid £4 a year in rent.  Documents, including two inventories from Cromwell’s tenancy, provide a room-by-room description of this home and its contents, which included 28 rings, three of which Cromwell was wearing at the time of the inventory. They also give an intriguing glimpse into his religious outlook.

Dr Holder says: “We think of Cromwell as Henry VIII’s henchman, carrying out his policy, including closing down the monasteries, and we know that by about 1530 Cromwell became one of the new Evangelical Protestants.

“But when you look at the inventory of his house in the 1520s, he doesn’t seem such a religious radical, he seems more of a traditional English Catholic.

“He’s got various religious paintings on the wall, he’s got his own holy relic, which is very much associated with traditional Catholics, not with the new Evangelicals, and he’s even got a home altar. In the 1520s he seems like much more of a conventional early Tudor Catholic gentleman.”

The coats of arms of his patron Cardinal Wolsey and former patron, Thomas Grey, which were on display in the townhouse, meanwhile, reveal a sense of loyalty beneath Cromwell’s ruthless exterior, says Dr Holder.

The exceptionally detailed analysis was made possible thanks to a “treasure trove” of documents held in the archives of the Drapers’ Company, the trade group that bought Cromwell’s mansion after his death.

Dr Holder adds: “These two houses were the homes of this great man, they were the places where he lived with his wife and two daughters, where his son grew up.  It was also the place he went back to at night after being with Henry VIII at court and just got on with the hard graft of running the country.

“No one else has looked at these two houses in quite as much detail comparing all the available evidence.  This is about as close as you are going to get to walking down these 16th-century corridors.”