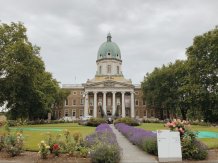 Professor Richard Overy was part of a team of academics who advised on the exhibition, which will bring unseen objects, untold stories and unheard voices together to help visitors to understand the most devastating conflict in modern history.

The exhibition, which opens on 20 October, spans two floors and occupying over 3000m2. The £30.7 million project sees IWM London become the first museum in the world to house dedicated Second World War Galleries and The Holocaust Galleries under the same roof, examining the Holocaust not as an isolated event but as fundamental to the course and consequences of the Second World War. There are 3,500 items and personal stories from over 80 countries on display.

The new galleries bring together significant new acquisitions and loans, alongside items from IWM’s collections, including:

• The first piece of wreckage of the USS Arizona, sunk at Pearl Harbor in 1941, ever to be displayed outside of the United States

• Objects showing the role of Einsatzgruppen – mobile execution units – in the Holocaust, including ‘forbidden’ photographs of mass shootings and the medal awarded to Erich von dem Bach-Zelewski for his time spent overseeing the execution of Jews in Riga and Minsk

• Extraordinary historical documents such as the rare birth certificate of living Holocaust Survivor Eva Clarke, one of very few people to be born in a concentration camp who survived past liberation

• The personal collection of 18-year old RAF air gunner Billy Strachan, who sold his bicycle and saxophone to pay for a voyage from Jamaica to Britain and attained the rank of Flight Lieutenant following 30 completed missions

• The headphones worn during the International Military Tribune at Nuremberg by Hans Frank, the German politician and lawyer who served as head of the German Government in Nazi-occupied Poland during the Second World War

• A section of concentration camp barrack that is likely to be the last remaining part of Velten, a sub-camp of Ravensbrück and Sachsenhausen, on public display for first time in UK history

IWM’s Second World War Galleries will highlight how the Second World War affected people from all over the world – from London, Russia and New Zealand to the Philippines and China – telling the vast extraordinary stories of ordinary people. The Holocaust Galleries tell the individual stories of some of the six million Jewish people murdered in the Holocaust through over 2,000 photos, books, artworks, letters and personal objects – from jewellery and clothing to toys and keepsakes.

Professor Overy served on the museum’s academic advisory board for the Second World War exhibition. The board were asked to review layout, exhibits and documents.

Professor Overy said: “These exhibitions mark a departure from the earlier galleries, with more coverage, particularly of other theatres of war, and more in-depth analysis based on the latest historical research. They are visually striking.

“They will both be important attractions in the next few years for a new generation of visitors and it was an honour to be involved.”

Diane Lees, Director General of Imperial War Museums said: “The Second World War and the Holocaust will soon pass out of living memory, leaving us without the first-hand testimony of veterans, eyewitnesses and survivors. IWM’s new galleries, which have been nearly six years in the making, will preserve their stories and ensure that the world never forgets what they experienced. With a recent YouGov poll demonstrating that 93% believe the Second World War and the Holocaust are relevant to learn about today and 78% think that genocide is currently happening in the world, the opening of these galleries has never been more significant.”