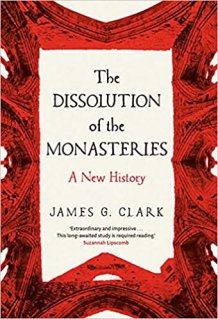 The Dissolution of the Monasteries A New History, by Professor James Clark

Cromwell struggled to control closure of the monasteries as his government lost its grip during dissolution, new book shows

Thomas Cromwell struggled to keep control of the closure of the monasteries and his government lost its grip during dissolution, a new book shows.

The chief minister – prominent in novels by Hilary Mantel - is seen as a political mastermind, but his handling of the closure of priories and abbeys was chaotic, the research argues.

Cromwell’s advice to those travelling the country expelling nuns and monks from religious orders was unclear, contradictory or non-existent, leading to mistakes and confusion. At the same time the government was using “spin” to portray the process as a success.

Most religious buildings remained standing, and they continued to dominate the landscape of many towns and cities at the time of Henry VIII’s death. Many remained until the third decade of his daughter Elizabeth’s reign.

The study, by Professor James Clark, from the University of Exeter, shows how the Reformation led more often to limbo rather than to sudden change. Religious houses were emptied but they, and their residents, did not disappear.

Confusion and miscommunication meant for much of the time after dissolution there was no decisive plan and the final fate of the monasteries was probably not sealed until the last few weeks before all of them were closed.

The book details how closures met resistance up and down the country. Not just the short, sharp shock of armed rebellion but – arguably more damaging – a general conspiracy to prevent the king and his ministers getting their hands on buildings, property, treasure and future earnings from the monasteries.

Even after the last of the monasteries was closed, Henry and his government were left with a good deal of unfinished business. The costs of the dissolution were still being carried by the crown long after any money it had earned had been spent.

Professor Clark said: “Henry and Cromwell certainly did not have total control over what happened, in fact the government lost its grip pretty quickly. Time and again provincial England fought back from the changes which others tried to impose on them. Henry and Cromwell struggled to control the process of Reformation from the beginning.

“At times this becomes comic. There were farcical scenes of Government officials showing up too late and being outwitted by local people who had already taken away the materials or treasure they had come to take. There was a large gap between the ambition of the Tudor government and what it was able to deliver on the ground. Local obstinacy, ingenuity and criminality frequently frustrated the plan.”

Professor Clark searched local archives as well as the national records to tell the story of dissolution from the point of view of the people who experienced it. The result is an epic new book, The Dissolution of the Monasteries, published by Yale University Press, the first on the subject for more than fifty years.

Professor Clark said: “All that stopped was what went on inside these buildings. The monks and nuns of medieval England were now swept away by the modernising Tudor state. That’s an assumption that has gathered pace because the story is often told in a top-down way, from the Government’s point of view. When you look beyond the official records you find a different picture. The Government had tried to “spin” what happened to cover up what was a much more messy and unfinished situation.”

Instructions to commissioners from Cromwell’s office did not state what should be done with buildings and their site. Commissioners were only asked to remove populations and record the site, buildings and contents. There were no instructions about the church and convent buildings.

The book shows how the government’s position was persistently uncertain. Commissioners were not given clear commands – either written or verbally – and communication was slow. They lost patience and took their own initiative. Richard Pollard had hoped to raze houses in Lincolnshire but was stopped. Thomas Legh decided to direct the demolition of houses in the Midlands in 1538 but was given a sharp rebuke from Cromwell and told to stop. He acknowledged these letters by saying he had received: “your lordshyppes letters the contents wherof admonysshith us”.

John London’s work in the Thames Valley, Gloucestershire and Warwickshire led to a formal complaint petition by Cromwell, who seems to have been so outraged London was forced to write to defend his own conduct several times during a 70 mile progress from Aylesbury to Coventry. Those in the towns where London had passed had been surprised and outraged by his behavour, but he insisted his instructions had involved some demolition.

At times instructions from Cromwell’s office were changed or then contradicted. In a handful of cases commissioners had first been told to take buildings down, for example in Lincolnshire and the north in spring 1537.

Letters from Bishop Ingworth, the crown’s principal agent charged with making sure friars surrendered, suggest he was uncertain about the scope of his authority. Cromwell’s office didn’t respond to his requests for information. In July 1538 he wrote: “I artely beseche you send to me yowr pleasure whether ye will have ye… freers styll.. or nott”. He wrote to others to ask, without success.

Closures started in early summer 1536 and by February 1537 two-thirds of religious houses had been closed. Commissioners wrote to the crown to warn it was likely local people would start to plunder their contents and materials so they would profit instead of the king. Looting was reported in some areas, leading to commissioners planning how the buildings should be defended.

The crown hoped to plunder the resources of monasteries and priories, so commissioners were told their first job was to value everything. Only then could demolition be considered. Those abbeys and priories demolished in the days and weeks after monks were suppressed or surrendered were in areas where kings works were already taking place, so building materials could be used. After that the priority for the crown was removing and redistributing contents, including farm animals and food stores, not taking-down buildings.

Civic leaders wrote to Cromwell to plead for use of religious buildings for governance and the administration of justice. Sometimes their lobbying had success, for example in Norwich. Some communities took on churches for parish use themselves. Many buildings – due to their prominent locations – continued to be used to store goods by tradesmen and as workspaces.

Many of those who had purchased former religious houses held on to them as temporary assets – leaving the buildings mothballed for years – and then sold them on. Convents in cities and towns were held by the crown until the last years of Henry’s reign. Libraries in some religious houses, such as St Augustine’s Abbey, Canterbury, remained in situ beyond the death of Henry. Cloisters remained in cities and towns such as Chichester and Sherborne until Elizabeth’s reign, growing in disrepair.