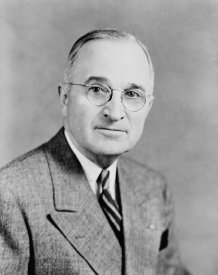 US early Cold War hostility towards Chinese Communist Party due to the influence of Truman’s nationalist beliefs, new research argues

US hostility towards the Chinese Communist Party in the early years of the Cold War stemmed from the influence of President Truman’s nationalist beliefs, a new study argues.

Research suggests the failure of the Truman administration to pursue rapprochement with Chinese Communists before the founding of the People’s Republic of China was not based on ideological distance or domestic politics, as has previously been suggested.

Dr Giuseppe Paparella from the University of Exeter argues Truman’s nationalist beliefs and his view of China as a ‘colony’ led him to shift economic and military support from the Kuomintang to local warlords in Western China to encourage covert operations against the CCP since late 1948.

Dr Paparella said: “Truman had been always sceptical about cultural and social compatibility between the Chinese society and communism. He believed Mao and his comrades were simply fighting on behalf of the Soviet Union, and therefore in their lack of agency as genuine Communist actors: the CCP was the instrument of ‘foreign domination.”

The documents examined by Dr Paparella do not mention the role of other domestic political groups, such as the China lobby—which was instead openly and viscerally anti-Communist—in shaping Truman’s decision to approve NSC 34/2 and encourage covert actions against the CCP.

The study, published in the International History Review, uses previously top-secret letters outlining ‘Operation Belly’ as well as recently declassified material such as The History of Civil Air Transport (CAT) and a number of memoranda by Roscoe H. Hillenkoetter, the first director of the Central Intelligence Agency. The papers show American support of clandestine operations to the Ma family between March and June 1949. This laid the ground for the so-called Chennault Plan and other well-documented covert initiatives pursued by the administration between June and November 1949; and it demonstrates the United States’ intention to develop a system of alliances with warlords in Western China as early as late 1948, during the final stages of the Chinese Civil War.

These efforts, which began to materialise in the spring of 1949, reflected the American policy of backing potential regional leaders to replace Chiang Kai-Shek which were capable to guide regional anti-communist movements in the mainland. The implementation of such a strategic approach remained however short-lived: as soon as the People’s Republic of China was officially established in late 1949, Truman gave renewed input to the strategy of Chinese Titoism by approving NSC 48/2, which rejected the Defense Department’s insistence on economic warfare against the P.R.C., and accelerated the American military withdrawal from Taiwan as a precondition to Chinese Titoism.

Dr Paparella said: “The establishment of a collaborative relationship between a Communist China and the United States could have been possible in the early stages of the Cold War if Truman had been more willing to listen to Acheson and advisors in the Division of Chinese Affairs. It is likely that, had Truman applied more restraint on the cognitive outcomes of his nationalist beliefs—that is, to his nationalist colony image of China—Sino-American relations might have developed in a different way during that period.

“It was not only during the Marshall mission, which ended in January 1947, that American policymakers lost a chance during the late 1940s for building a cooperative relation with the CCP - such a possibility was lost again between late 1948 and early 1949. Before the founding of the People’s Republic of China, the American and CCP leaderships were not able to establish any fruitful diplomatic interactions, despite cautious and informal attempts at accommodating the CCP pursued by the American embassy in China between April and July 1949.”

A memo from Hillenkoetter on June 1, 1949 suggests the CIA and Truman were closely in touch, and coordinating anti-CCP insurgency, with the Ma family.

“If the Nationalists Government takes no action within the next few days to permit establishment of a Mongolian autonomous government … Mongol advocates now in Canton will go to Alashan and proclaim an independent Mongolian government. Ma’s will support this action. Ma Hongkui has again left Ningxia and with Ma Bufang is preparing defense in the Gansu-Qinghai area.”

A statement of policy approved by Truman on March 3 1949 said: “Our principal reliance in combating Kremlin influence in China should, however, be on the activities of indigenous Chinese elements. Because we bear the incubus of interventionists, our official interest in any support of these elements, a vast and delicate enterprise, should not be apparent and should be implemented through appropriate clandestine channels.”