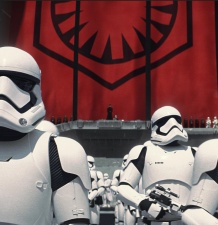 The History and Politics of Star Wars: Death Stars and Democracy

Real-world historical events and political actors have played a pivotal role in shaping the Star Wars universe according to a ground-breaking new book published this week.

From the fall of the Soviet Union to the West’s ‘war on terror’, Vietnam to the Weimar Republic, some of modern history’s most defining periods have been dramatized and realised by George Lucas’ extended fictional series. And its cast of iconic heroes and villains have drawn from politicians and dictators as varied as Hitler, Stalin, George W Bush and Donald Trump.

Published by Routledge, The History and Politics of Star Wars: Death Stars and Democracy is the first academic analysis of Disney’s 45-year-old franchise spanning hundreds of films, books and videogames.

“Star Wars is a cultural weathervane that shows us which way the wind is blowing in America,” says author Dr Chris Kempshall, a Postdoctoral Research Fellow in the University of Exeter’s history department. “It is constantly mining historical, real-world events and reimagining them in its fictional universe.”

Chris, a specialist in First World War history, began researching the book in 2017, sifting through the countless novels – written and graphic – that have expanded and diversified the Star Wars canon well beyond the parameters established by the blockbuster films of the late 70s and early 80s. His work has also encompassed scores of licensed videogames, spinoff television series and animations, and even a table-top game.

Across this huge body of work, Chris says, clear themes have proven to be remarkably consistent.

“The most important element is the Empire – everyone recognises it as evil, but it’s so adaptable and malleable that it has come to represent different historical periods at various points in the series, whether Nazi Germany, the Soviet Union, America in Vietnam or later in Iraq,” he says. “But ironically, Darth Vader, arguably the most recognisable character in the entire series, is almost entirely irrelevant. He’s been compared to Adolf Hitler – even by actress Carrie Fisher – but unlike Hitler, Vader has no prevailing ideology and little charisma. When you look at the original trilogy, he appears for just 34 minutes and has 146 lines of dialogue. The Emperor, on the other hand, is a much more interesting and nuanced character, and has clear references to Hitler, Louis XIV, Nixon, George W Bush and even Trump.”

The book examines the influences behind the Jedi and finds strong parallels with the United Nations, particularly in its role as the ‘global peacekeeper’. And like the UN, there are instances in the Star Wars saga where the Jedi have refused to intervene in a situation outside of their rules of engagement. Rather than being beacons of goodness, Chris finds, their moral code is subject to variation.

Of the three film trilogies, the critically maligned prequels are the most political, Chris says, effectively serving as George Lucas’ political thesis “of how democracy collapses into fascism”.

“It was this that Lucas was most interested in – but he knew he couldn’t just start with that otherwise he would never have carried the audience with him,” he says. “So, in the original trilogy, we know the Empire is evil, but there’s little explanation as to why that is. In the prequels we get to see the collapse of democracy into a state of imperial rule.”

To mark the publication of the book, an online Q&A will be held on 13 August, with Chris answering questions from Dr Sam Langsdale, a scholar of feminist philosophy and renowned authority on contemporary culture, including Star Wars.

“Whenever something new comes out that talks about the Star Wars universe in this context, the usual cry of complaint is ‘don’t make it political’,” adds Chris. “But Star Wars has always been political, and everyone involved in its creation knew that. The sheer tonnage of historical and political material embedded at every conceivable level is remarkable. Star Wars paints a very bleak picture of democracy – and how democracy is never seized by fascists and dictators but given away. It is very much a cautionary tale.”

The History and Politics of Star Wars: Death Stars and Democracy will be published by Routledge on 11th August.

The online Q&A will take place on the 13th, and can be booked via Zoom.