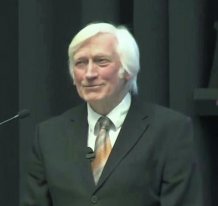 A critically lauded account of the Second World War has been awarded the country’s foremost prize for military history writing.

Blood and Ruins, by Professor Richard Overy, has won the 2022 Duke of Wellington Medal for Military History, bestowed by The Royal United Services Institute.

The book, published in 2021, argues that the Second World War should be framed as the violent end to almost a century of global imperial expansion, reaching its peak in the ambitions of Italy, Germany and Japan in the 1930s and early 1940s.
Across more than 1,000 pages, Professor Overy explores how war on such a huge scale was fought, supplied, paid for, supported by mass mobilization and morally justified.

“I wanted to write a history of the Second World War that had something new to say,” Professor Overy says. “I put the war into a much wider global context and with a much longer background, based on the idea that it was the last gasp of the imperialism that had characterised global politics since the mid-nineteenth century.

“I also wanted to ask large questions about the war: how is it possible to mobilize on such a remarkable scale? How did mass armies cope with the psychological and emotional impact on the millions of mainly civilians mobilised? Why was there such a high level of atrocity and crime? And finally, what technical or operational innovations explain victory by one side, defeat for the other?”

A Professor of History at the University of Exeter since 2004, Professor Overy has written extensively on the Second World War, and on the Royal Airforce, Nazi Germany, and the Soviet Union. Blood and Ruins took him five years to write and was based on exhaustive research of secondary literature in four languages, as well as official publications and memoirs.

Upon release, it received glowing reviews from critics, being described as “extraordinarily compelling” by the Times Literary Supplement, and “the finest single-volume history of World War Two” by the Wall Street Journal. It was also shortlisted for the Gilder Lehrman Prize for Military History in the United States of America.

Professor Michael Clarke, one of judges for this year's Duke of Wellington Medal, said: “It substantiates with excellent scholarship the ‘long war thesis’ of the Twentieth Century; that we can see the wars of 1914 – 1991 as part of a continuum during the great century of decolonisation. It reflects a lifetime of dedicated study and in a field of Second World War histories that has become very crowded in recent years, Richard Overy's work really stands out - authoritative, original and definitive in its thesis. A worthy and unanimous winner of the medal for 2022.”

The book beat five other shortlisted entries, including: Not One Inch: America, Russia and the Making of the Post-Cold War Stalemate, by Mary Sarotte; Nuclear Folly: A New History of the Cuban Missile Crisis, by Serhii Plokhy; and Hitler's American Gamble: Pearl Harbour and the German March to Global War, by Brendan Simms and Charlie Laderman.

The Royal United Services Institute is the world’s oldest and the UK’s leading defence and security think tank. It’s annual Duke of Wellington Medal for Military History recognises the best English language writing on military history, interpreted widely to include the role of the armed forces, the conduct of wars, and the impact of conflict on nations and societies, over any period up to the present day.

“Every author wonders whether the book they have written will be understood and appreciated for all the effort that goes into it, so I am delighted with the award,” Professor Overy adds. “There were other very good books on the shortlist, which also deserve recognition. And I'm honoured that the Duke of Wellington will host the presentation ceremony in November at his London house.”